In Greater Mumbai and most Tier-1 cities, the bottom two segments in the income pyramid will not be able to afford a 26-sq mt house. Wikimedia

Large developers rarely cater to households at the bottom of the income pyramid. But housing markets are interdependent. In developed countries, houses built for the upper classes usually trickle down to the middle and lower classes over time.  This is because we live in houses that are more spacious than what our ancestors had. This is not necessarily true, because people who migrate to large Indian cities usually consume lesser space than their parents did. But this does not change the fact that the average household consumes more space today than they did many decades ago.

In Indian metropolises, houses do not trickle down enough from the upper classes to the middle and lower classes because not much floor space is being built in the heart of cities. Floor space is so expensive, and developers are not allowed to build more of it. So, there is not much of an incentive for high-income households to sell their houses to a middle or a low-income household, and move into a more spacious house.

According to Mckinsey, the bottom two segments cannot afford a 26 sq mt house in Greater Mumbai and most Tier-1 cities. Mckinsey estimates that with major policy reforms, most households that earn 50-80 per cent of the median income will be able to afford livable houses, without subsidies and other forms of assistance.

Governments across the world are aware that many households cannot afford housing that meets minimum standards. So, they set ambitious targets like the Narendra Modi government's mission to build “Housing For All” by 2022. As even prosperous countries do not have unlimited budgets, such goals are unrealistic. 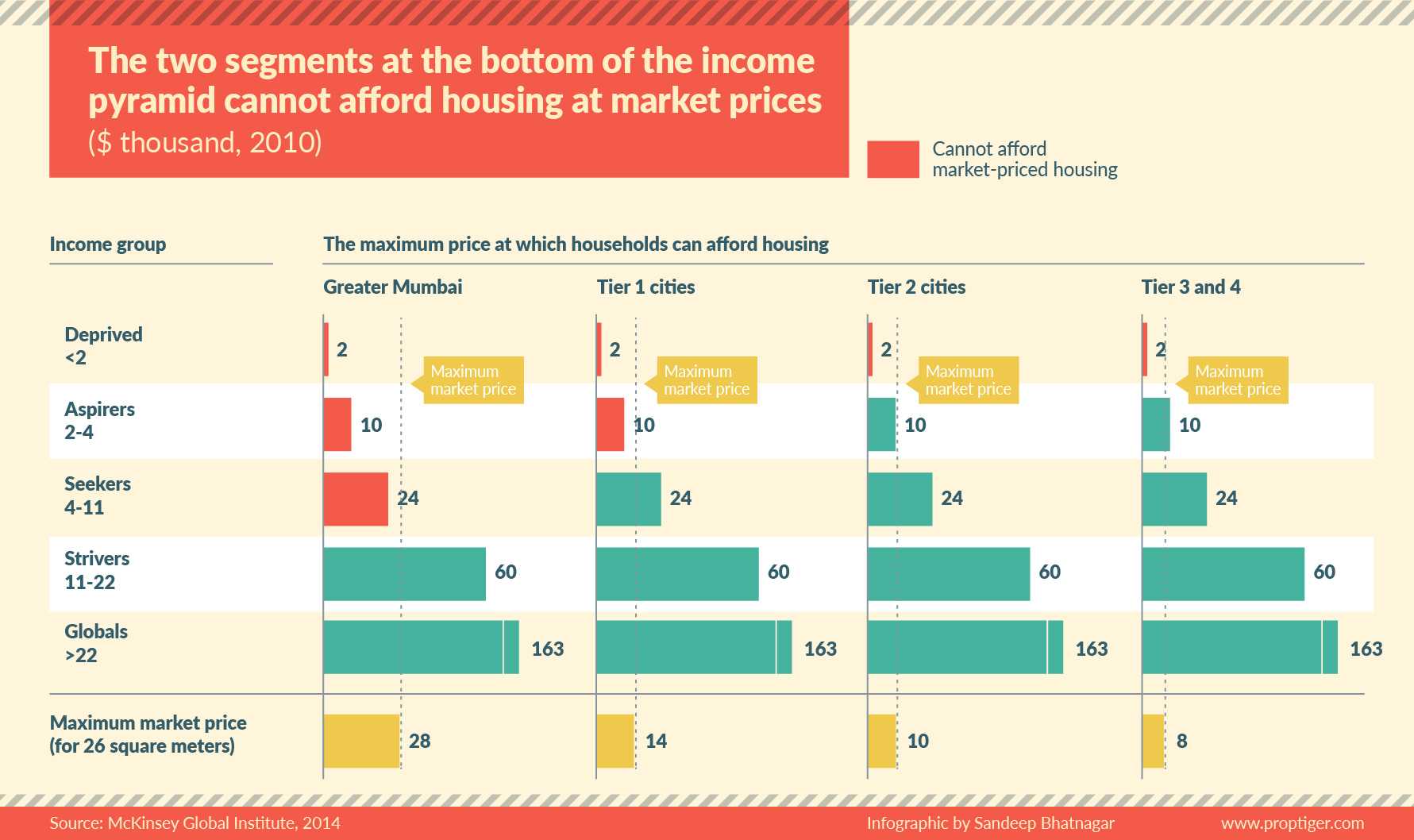 When governments set unrealistic targets, this leads to many unintended consequences. Firstly, households that are unable to afford houses that cannot meet minimum standards will live in informal houses, and slip out of the formal economy. So, they live in more congested spaces. More households squeeze themselves into congested spaces as they do in Mumbai and other Indian cities. As the informal economy is large in India, the cost to the economy is huge. They will also find it difficult to afford a formal house later in life because it is difficult to improve your financial condition if you are not part of the formal economy. Their real estate assets cannot be easily traded in the market or used as collateral for loans. Secondly, to meet unrealistic targets, governments build houses in areas that do not have proper infrastructure, amenities or jobs. It is cheaper for government contractors to buy land in such areas.

The fact is that it takes time for developing countries to improve housing standards. When a country is poor, it is good to allow many households to live in houses that do not meet minimum housing standards. Low-income households will be able to move into formal houses if they are provided electricity, water supply and sewerage, along with the freedom to trade their assets in the market. The stock of rental housing has declined in most Indian cities, especially in north India. People who live in informal houses do not improve their existing houses because they may lose tenure at any moment. In fact, this should bother us more than the fact that many households live in informal houses.

The media often pits the wealthy who live in high rises against slum dwellers. But if households that live in high rises are allowed to move into more spacious houses, they will be able to sell their current apartments to low-income households. For this to happen, the government should remove restrictions on what to build, where to build and how to build. Hong Kong, for example, has done precisely this. Skyscrapers are not built at the expense of slum-dwellers. When income levels rise, high-income families in cities like Delhi are more likely to move to suburbs, leaving their apartments in the centre of the city to others. But this will not happen if the government imposes rent control restrictions, or keep central city floor space too expensive.

One of the problems with India's housing policy is that it places too much emphasis on building houses for the poor. But it really matters whether landlords are able to profitably rent out existing houses to the poor. It really matters whether high-income households are able to sell their houses in the resale market to low-income households.  Income levels of households rise over years. The economic condition of low-income households usually improve over years. So, the housing market is undergoing many changes all the time. If governments are too lazy to wait, such changes may never happen.